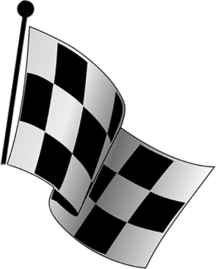 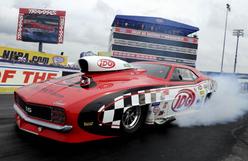 In 2013, Smith not only won the ADRL Battle of the Belts in the Pro Mod class, but he

won two races in the NHRA Series as well. (At the NHRA Norwalk race, he and his son,

win the NHRA Get Screened America Pro Mod Championship in 2013. Yet again, right

beside his son, Matt in the Pro Stock Motorcycle class.

They became the only father/son duo to win a NHRA Championship in the same season.

In 2014 Smith once again set the racing world on fire. Winning three races in the NHRA

Championship, but he won numerous races as well.  He won the PDRA Spring

Nationals in Rockingham, NC, as well as the PDRA North-South Shootout in Budds

Creek, MD and then again at the Rockingham Dragway for Dragstock XII. Smith also

races of the Series, put him out front from the beginning. He won the NHRA Gainesville

and Atlanta races. Not only did Smith win his third NHRA Pro Mod Championship title,

but he was also inducted into the NHRA SouthEastern Division Hall of Fame in 2016.

After sitting out four races in the 2017 season, due to back surgery, Smith came back with a vengeance.  In Englishtown, New Jersey, his first race back on tour, Smith won the NHRA Pro Mod event. After numerous back to back Semi-Final appearances, Smith finished top-10 in points, despite being out almost half the season. During the 2017 season, Smith also was crew chief to Khalid Balooshi and Johnathan Gray.  Not only did his two drivers finish top-10 in the Pro Mod Championship point standings as well, but Gray went on to win the Charlotte race event.

The 2018 NHRA Pro Mod season proved to be yet another strong one for Smith. With three wins under his belt during the season, Smith narrowly missed winning another Championship.  Coming down to the final race in Las Vegas, he gave it his all and tried to chase down the points' leader.  Losing the Championship by a mere seven points. However with a solid season under him, as well as his teammate, Khalid Al Balooshi (finishing 8th in the standings).

In 2019, Smith once again was a force to be reckoned with.  He finished fifth in the overall NHRA Pro Mod Points Standings while missing out on a few events during the season.  Winning in St. Louis was the highlight of his season, as well as being awarded the Mike Aiello Award in October.

In 2020, Smith sat out the beginning of the season due to an emergency back surgery.  However, not only did he crew chief both of his cars to the Finals and winning in Indy just weeks later. But when Smith got back behind the wheel, in just his second race back, Smith won the NHRA GatorNationals.  And once again proved he was a force to be reckoned with.

Smith is ready to take on the World in 2021 with his Nitrous Injected Pro Modified Camaro and get back on top. 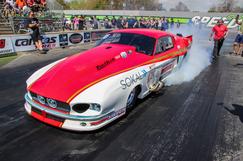 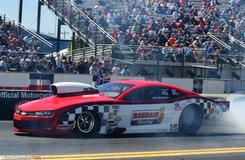 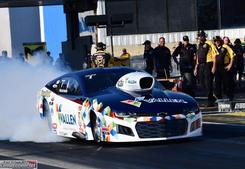 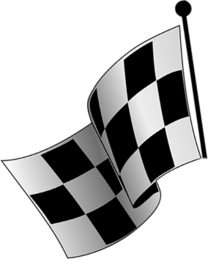 Smith was born in Walnut Cove, NC on Christmas Day. He now lives with his wife in nearby King, NC.  Smith wrestled and played football in high school. He turned down several scholarship offers to play football to pursue a professional career in drag racing.  Almost 30 years later, Smith still has no regrets about making that decision.

Like all racers in “NASCAR” Country Smith did make a run on the circle tracks of the southeast in 1988. He competed in several NASCAR Busch Grand National events but has his stock car effort on the back burner as he pursues his goal, to win another championship.

In 1990, Smith campaigned a Pontiac Trans Am sponsored by STP and painted in the blue and red color scheme made famous by Smiths long time friend Richard Petty. Smith and his Petty “look-alike” car finished sixth in points that year. In 1993, Smith finished eighth in the IHRA World Championship points race. That same year also gave Smith his first NHRA career victory at the Autolite Nationals at Sears Point Raceway in California.

After mediocre seasons in 1994 and 1995, Smith teamed with Troy Humphrey in 1996, driving Humphreys Pontiac Firebird. Throughout 1996, Smith earned his first #1 qualifying position of his NHRA career at the Fram Nationals in Atlanta, GA. He was also #1 at the Mopar Nationals in Englishtown, NJ and at the Pennzoil Nationals in Memphis, TN that year.

Smith also added two final round appearances to his resume in 1996, bringing his career total to nine, by taking runner-up honors at the prestigious NHRA Mac Tools U.S. Nationals and the Winston Select Finals. Smith finished fifth in the NHRA points in 1996, his highest finish ever. Racing regularly since 1989 in the NHRA, Smith has never finished lower the 13th in the points.

Smith began 1997 running NHRA Pro Stock, however half way through the year Smith decided to return to his roots, the IHRA, where he would, yet again, try his hand at a new class, Pro Modified. In his first full year in Pro Modified, Smith finished in astounding third in points.  In 1999, Smith would go on to claim another NHRA Pro Stock win on Halloween night at the Matco Tools Supernationals in Houston, TX.

After running Pro Modified in the IHRA for the next three seasons Smith learned in 2001, that he would once again go back and perform in NHRA, after they announced they would run Pro Modified at five national events in 2001. Smith once again proved that he could make the transition to NHRA by winning its first ever Pro Modified event, the 2001 Mac Tools Gatornationals.

Even though Smith ran a limited schedule in 2002 and 2003 in Pro Modified, this did not prevent him from winning the most prestigious drag race in the world the NHRA Mac Tools U.S. Nationals. In 2004, Smith would finish among the top-10 in points, in what many call the hardest fought World Championship in the history of drag racing.

During the next few years Smith would go on to dominate the Pro Modified class around home, while still competing in the NHRA Pro Stock series. In 2006, Smith would once again go back to his roots, the IHRA. This time however, in a Pro Stock. Smith is the most decorated driver in the IHRA Pro Stock series and after a 13 year hiatus in Pro Stock; many wondered would he dominate again, and that he did.

Running his first event in 13 years at Budds Creek, MD, Smith would once again prove he is a force to be reckoned with, when he went on to win the entire event.

2007 marked Smith's first full year back in the IHRA Pro Stock class in over 13 years.  Smith not only finished 10th in the IHRA Pro Stock Championship Points, but accomplished numerous awards along the way.  Smith was named the No. 1 Mountain Motor Racer of All-Time.  Smith also captured the 2007 Pro Stock Tuner Challenge Award in the IHRA Series.

He was inducted as one of the inaugural four into the Bristol Motorsports Hall of Fame and also into the 220 MPH Club as well.At the end of the 2009 season, Smith teamed up with Bahrain 1 Racing in order to shake things up a bit for 2010 in the Nitrous Pro Modified class.

In 2010, Smith won numerous races. Including three races in a row in the American Drag Racing League (ADRL) where he led the Championship points for most of the season.